The Wolfman (T. Wolfmann) is a major character in the ShadowSwine54 series. He attacks Hulk Hogan and his friends at often inconvenient moments. As the series progresses, he begins to fight alongside the ShadowSwine Crew, though only to protect the household that he illegally dwells within.

It is unknown where exactly he came from, but the Wolfman found his way to the ShadowSwine Crew's house and marked it as a spot to ransack. In the prequel events of The Ultimate Battle, it is revealed that he had initially pilfered the crew's funds, leaving claw marks behind as evidence of his burglary. Hoodie Hogan managed to defeat him, but the Wolfman had only just begun his streak of terror on the household. The Wolfman, though strong enough to operate on his own, is no lone wolf when a chance to kill Hulk Hogan arrives, as he had been involved with both the Mugger Monsters and the Alliance in an effort to defeat the hulkster.

He continues to both terrorize and freeload off the crew. It is implied that much of his time is spent in the basement due to the crew cleverly leading him both in and out for their own convenience by using the door's one-sided locking mechanic.

The Wolfman appears to have gained more "privilege" within the household after the second poor era, as he now owns and operates an automobile that is parked at the apartment. He is also seen dwelling more frequently outside of the basement, with access to the ShadowSwine Crew's refrigerator as a source of nourishment and access to their recording technology in order to host his own "Wolfman Podcast". It is unclear if any of this is at the ShadowSwine Crew's consent, but they do not appear to object. He appears to possess an odd fascination with canned Cool Whip, as he is observed to be retrieving it from the fridge and "wielding" it on multiple accounts.

The Wolfman appears to have a history involving sexual assault, with his initial curiosity at the thought of having illegitimate children and later discussing consent before sexual intercourse on his podcast. He works at a Target in order to make money for his children he is not sure he even has.

Being a half-animal, the Wolfman is a ruthless beast with overwhelming strength to match his attitude. He is able to fight on par with the likes of Hoodie Hogan and Stone Cold. Against non-hoodie characters, the Wolfman has demonstrated complete superiority in power. He is evidently one of the top fighters in ShadowSwine54, with power that far exceeds Mugger Monster-level at the least. Following the events of Secret of the Hogan Cubes, he remarked that he had 'trained' and demonstrated his boost in power against Santa. His current power level is assumed to be extraordinarily high. 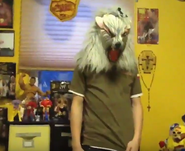 The Wolfman in The Alliance.

The Wolfman enjoying what he dubs "Shadow's Wine" with Stone Cold. 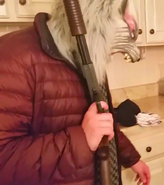 In his time as a Mugger Monster, the Wolfman carried a rifle with him. He never used it, oddly enough.

The Wolfman V.S. The Host

Community content is available under CC-BY-SA unless otherwise noted.