Psycho Jim was a psychotic freak that escaped from the local insane asylum. He broke into Hulk Hogan's apartment and lived in his closet for years before being released by The Shooter.

He was later revealed to be a creation of Hillbilly Jim, who implanted forbidden knowledge into his brain, causing Psycho Jim to go insane.

Psycho Jim was a very mysterious figure. There were no records of his identity nor his origins other than the fact that he was admitted to an insane asylum many decades ago. At one point, he had broken out of his solitary confinement and headed directly to the ShadowSwine Crew's apartment because he sensed usage of Voodoo. Figuring Hillbilly Jim was somehow connected to the Voodoo in the atmosphere, Psycho Jim waited patiently in the closet for his creator to return.

Jim possessed an extreme amount of fighting power. He also appeared to be incapable of fear and showcased superhuman durability.

Psycho Jim VS Stone Cold- Jim's escape from the asylum made headlines, which Hulk Hogan read before disregarding the unsettling news and going to sleep. Stone Cold, however, was still awake in time to hear Psycho Jim knocking on the door of the apartment. Upon entering the residence, Psycho Jim immediately attacked Stone Cold Steve Austin, resulting in a brutal brawl. Willie Nelson called the police, but Jim hid in a closet and Stone Cold was too fatigued to pursue him.

Secret of the Hogan Cubes- Psycho Jim was the first antagonist to battle in the movie, where he reunited with Hillbilly Jim and revealed his identity to all witnesses. He fought Hillbilly Jim and managed to push his creator into a position where he had no choice but to unleash his Voodoo power. Psycho Jim was completely annihilated after he revealed the N.W.O was on its way. 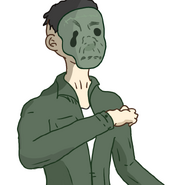 Cartoon Psycho Jim
Add a photo to this gallery

Retrieved from "https://shadowswine.fandom.com/wiki/Psycho_Jim?oldid=5767"
Community content is available under CC-BY-SA unless otherwise noted.