Crazy Clown is a main antagonist of the Hogan Halloween Specials. He served as one of the Mugger Monsters who stole Willie Nelson's jewels and valuables. He worked alongside his partner Creepy Cronk until he received spinal damage in the finale, incapacitating him for the rest of the specials.

Crazy Clown is a deranged circus freak that performed at the Coney Island freak show before being recruited by the Mugger Monsters. He was once a sane being, but it is now apparent that his mind is demented. There is little known of Crazy Clown's life before he became a mugger.

Hogan Halloween Special Part 1: Willie's Weed- Creepy Cronk and Crazy Clown broke into the apartment to steal jewels. Initially, they planned to pillage the house and leave immediately, but an under-the-influence Willie Nelson interrupted their heist. Taking advantage of his marijuana-influenced state, the muggers exploit Willie into giving them even more jewels than they expected.

Hogan Halloween Special Part 2: A Friend is Lost- Crazy Clown makes his return in the second part of the specials where he defeats Hulk Hogan, John Cena, and later Hoodie Hogan. After castrating Willie Nelson and Darth Vader, he escapes alongside Creepy Cronk and the newest mugger recruit: Feen.

Hogan Halloween Special Part 4: A Grim Situation- A victim of Hoodie Hogan's rampage, Crazy Clown was beaten down. He later escaped off-screen during the battle between the Reaper and Hogan.

Hogan Halloween Special Part 5: Ground Zeroes- Crazy Clown met with Whimsical Whiskers and The Wolfman to discuss their final plot against Hulk Hogan. They broke into the apartment and hid in the basement for the remainder of the month until Halloween.

Hogan Halloween Special Finale: Part 1- Crazy Clown spied on Hulk Hogan and his friends as they discussed the threat of the Mugger Monsters. Later in the episode he used all of the chaos as a distraction to steal the household's jewels alongside Creepy Cronk.

Hogan Halloween Special Finale: Part 2- Crazy Clown served in the final all-out war against the ShadowSwine Crew, but fell valiantly in battle with a spinal injury. He was rushed off the set by The Medic.

Crazy Clown is one of the more powerful non-hoodie antagonists of ShadowSwine54. He was able to completely overpower base Hulk Hogan and together with Creepy Cronk, he defeated Hoodie Hogan.

Physical Strength- Crazy Clown possess immense physical prowess. He uses this power most often by violently swiping at his enemies.

Red Eyes- Crazy Clown is able to locate openings in an enemy's guard by scanning them with his red eyes, which glow upon use. It is effective against single targets such as Hulk Hogan, which has been demonstrated in Part 1: Willie's Weed. However the combined forces of Willie Nelson and Darth Vader disrupted his focus and allowed them to successfully rush him.

Observationary Skill- Crazy Clown has demonstrated great observation of his enemy's tactics and powers. It is possible he is an expert on research of the ShadowSwine Crew, as he possesses much knowledge of their weaknesses and strengths. He has shown significant knowledge of Hogan's hoodie form after only encountering it once before. 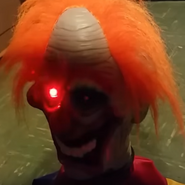 Crazy Clown is taken down.
Add a photo to this gallery

Retrieved from "https://shadowswine.fandom.com/wiki/Crazy_Clown?oldid=5794"
Community content is available under CC-BY-SA unless otherwise noted.