CM Punk is a supervisor of the Second Wing Crew of ShadowSwine54. His job is to make sure each and every crew member does their job correctly and efficiently.

Once a famed WWE Wrestler, CM Punk dominated the ring with his extraordinary talent. However, he soon left the business due to arguments with Vince McMahon. CM Punk managed to find a job at the ShadowSwine studio, where he was given authority over the Second Wing Crew. He now supervises all workers in order to make sure they do their jobs rather than slack off. CM Punk also defends the household from attackers such as Mario.

As a heavy liberal, his leftist views often lead him to assault anyone who disagrees with him. Anything from stating that there are only two genders to bearing arms will cause CM Punk to enter a violent and murderous state.

Punk can hold his own in most fights, as he was even able to fight The Rock, Popeye, and John Cena all at once and manage to defeat them with minimal difficulty. Most of his strength comes from his technical skill, however. CM Punk often counters large enemy attacks at the last second and uses his surroundings to his advantage.

Bulldog- A powerful technique of CM Punk which was able to temporarily K.O. John Cena in CM Punk joins ShadowSwine.

G.T.S.- CM Punk's signature move in which he lifts his opponent and delivers a knee to their face.

Pipe Bomb- Punk yells out the name of this attack as he smashes a large microphone into a stunned enemy.

CM Punk joins ShadowSwine- Punk was sent to supervise the Second Wing and use force if necessary. He defeats John Cena, The Rock, and Popeye after they all attempt to murder him in order to continue their slacking off.

CM Punk's Liberal Outrage- CM Punk goes on a murderous rampage after Hulk Hogan assumes Wario's gender. He is then defeated by Nashville.

The first appearance of CM Punk. 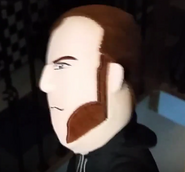 CM Punk in CM Punk's Liberal Outrage.
Add a photo to this gallery

Retrieved from "https://shadowswine.fandom.com/wiki/CM_Punk?oldid=5413"
Community content is available under CC-BY-SA unless otherwise noted.